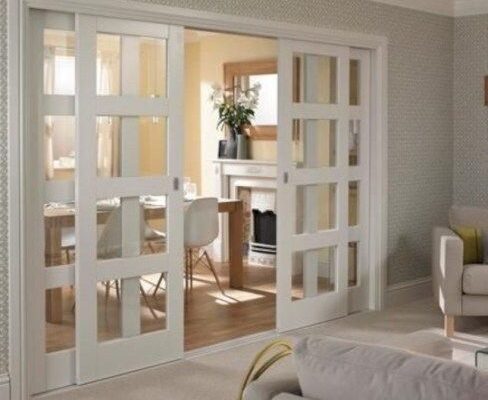 Close Sliding Doors are a unique element to add to your home. They function as single or double doors that slide on tracks to open and shut. The tracks are found on the top or bottom of the frame, depending on the type of door, and allow the door to easily move along the track to be opened and closed. There are a couple of different types of sliding doors, and they are as follows:

Pocket – Pocket doors slide horizontally on a track that disappears into the adjacent wall. Allowing the door to actually slide into the wall. Because the doors do disappear into the wall, they free up valuable floor space, which is great for smaller rooms. Pocket doors were very popular during the Victorian period, so they add a certain old-fashioned charm to a home. You can often find them in older homes, but many newer homes have them as well, especially when space constraints pose a problem for traditional doors. Pocket doors come as either single or double doors.

Arcadia – Arcadia doors are glass doors that are typically use as exterior exits. Often these will lead to a patio or deck. And they are construct of strong glass that can withstand the elements. These are popular because they provide an expansive view of the outdoors. As well as letting in lots of natural light.

Bypass – Bypass doors consist of at least two doors that slide next to one another, with one going behind the other when opened. When they are adjacent to one another, they effectively close off an area. These are typically use for closets or pantries.

French – Though French doors typically swing open and shut, some are make to slide on tracks to save space while still providing the light and beauty that they are know for.

Sonji – Definitely the least common of the sliding doors, Sonji are Japanese doors that are crafted of wood and paper. These slide on tracks to open and close and usually can found in protected interior areas, or leading to a sunroom or garden area.